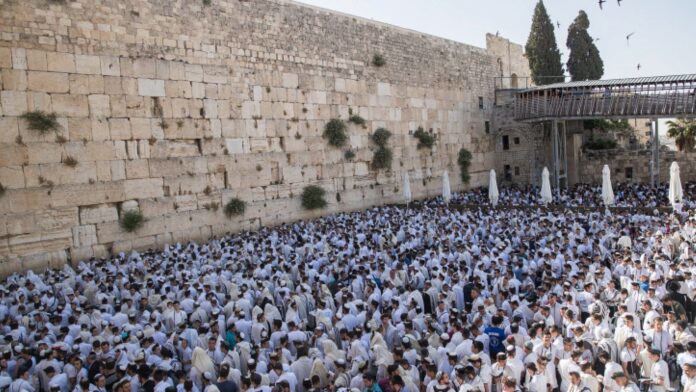 Jews at the Western Wall For Jerusalem Day

JD: Today I want to talk about Jerusalem Day. It’s a very special day especially for the state of Israel. Winkie take a moment and talk to us about what is Jerusalem Day. How did it all come about?

WM: Well Jimmy the Jewish people have been connected to Jerusalem as a city and as its capital where the thrones of David, Solomon and the rest of the kings all sat for about 3,000 years more or less maybe even more. During that time only 19 years was it ever separated into two entities and that was between 1948 and 1967 when the illegal Jordanian Occupation Administration ruled the area as a result of the 1948 War of Independence. And for some reason the Arab, their supporters and ignorant or uneducated people whether their in the media, or in government, or in diplomacy seek to eternalize an east and a west Jerusalem which never really existed except as I said for those 19 years.

In 1967 when Jerusalem was reunited the outpouring of passion and prayer and acknowledgment to the prophetic fulfillment that once again the Jewish people rule Jerusalem and they do it humanely. You have lived in the city. Christians can go to the church, Muslims can go to Mosque, and Jews go wherever they want to go except the Temple Mount to pray. But the city is open and not like it was divided for the 19 years. This event sent many Jews even those who are not that religious was viewed as a vision come true and that’s why we celebrate our united, reunited, undivided, eternal capital of Jerusalem.

The 54th Anniversary of Jerusalem Day marks the reunification of Jerusalem after some 2,000 years. Destroyed in 70 AD the holy city was reunited on June 7, 1967 during the Six Day War. God’s declaration in II Samuel 5, 6, and 7 that Jerusalem was the political, spiritual, and eternal capital for the Jewish people was confirmed and once again set in place forever.