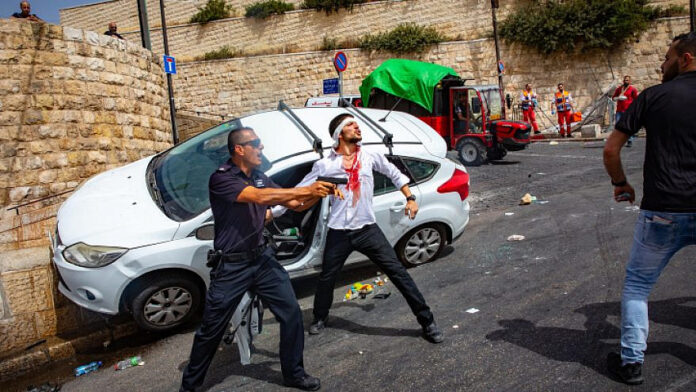 JNS: The unrest in in the Israeli capital continued on Monday morning—Jerusalem Day—with Arab riots on the Temple Mount and in the Old City. Thirteen Israeli police officers were injured in the clashes, including one who was hospitalized, Army Radio reported.

“Behold, I will make Jerusalem a cup of trembling unto all the people round about, when they shall be in the siege both against Judah and against Jerusalem.” Zechariah 12:2

The Palestinian Red Crescent reported that more than 200 rioters were injured. The riots were the latest in a series of disturbances that erupted in the city on Friday night, resulting in 18 officers and nearly 300 rioters being injured over the weekend.

At the Lions’ Gate, a group of rioters hurled rocks at an Israeli vehicle from close range, opening its doors and attempting to attack its occupants. During the driver’s attempt to escape, the car mounted the sidewalk, striking one of the assailants. The rioters then set on the vehicle, at which point an Israeli police officer arrived on the scene, firing in the air to disperse the rioters. Read More