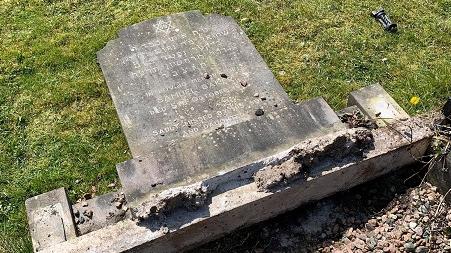 Jerusalem Online: Ten Jewish gravestones in Belfast, Northern Ireland, have recently been vandalized, and police are investigating the incident as a hate crime. The incident occurred in the midst of a recent wave of violence in the city.

“then they shall know that I am the LORD their God, who sent them into captivity among the nations, but also brought them back to their land, and left none of them captive any longer.’ Ezekiel 39:28

“City Cemetery, like any graveyard, is a place where members of the community come to pay their respects,” Police Service Northern Ireland Inspector Róisín Brown told the Irish Times. “The damage to these graves shows a total lack of respect for others and will have a significant impact on individuals and families within the Jewish community.”

The Community Security Trust, the security arm of the Jewish community in the United Kingdom, said it is coordinating with the local police to find the perpetrates.

The Jewish section of Belfast City Cemetery, which opened in 1869, was the city’s first Jewish cemetery, according to the website Jewish Communities & Records-UK. In 1964, the last Jewish burial took place there. Read More