JPost Op-Ed: Operation Breaking Dawn, Israel’s 55-hour war against Islamic Jihad in Gaza that ended on Sunday night, not only aroused the wrath of the world’s usual antisemitic suspects; it also caused the small but vociferous domestic “peace camp” chorus to sing its tired refrain about the desperate need for a political solution to the conflict.

The tired “two-state” mantra is also reiterated by White House and State Department officials at every opportunity, other than when they are busily beseeching Iran to return to the nuclear deal. Naturally, US President Joe Biden repeated it during his visit last month to Israel and the Palestinian Authority (PA).

He went beyond his already foolish even-handedness, however, when touring the Augusta Victoria Hospital on the Mount of Olives in Jerusalem. On his way to the medical center that treats Palestinian patients from East Jerusalem, Judea, Samaria and Gaza, his team removed the Israeli flag from his limousine and forbade Israeli reporters from covering the event. He then gave a little speech in which he likened the plight of the Palestinians to that of his Irish forebears.

“[W]e have a long history not fundamentally unlike the Palestinian people with Great Britain and their attitude toward Irish-Catholics over the years, for 400 years,” he said, before quoting an Irish poem about hoping for a “tidal wave of justice.”

One thing that can be said about Biden is that at least he’s consistent when it comes to the fantasy that it’s viable to engage in diplomacy with entities bent on the annihilation of the West in general and the Jewish state in particular. The trouble is that while he doesn’t deny Iran’s race to nuclear weapons – and believes that an agreement like a new version of the Joint Comprehensive Plan of Action will prevent the regime in Tehran from acquiring them – he thinks that Palestinian terrorism is an expression of frustration over a lack of independence.

Ironically, the Jew-killers in Judea, Samaria and Gaza are the first to acknowledge that, for them, death is preferable to life alongside Israel. Read More …

Opinion: And the Lord said to her:

“Two nations are in your womb,
Two peoples shall be separated from your body;
One people shall be stronger than the other,
And the older shall serve the younger.” Genesis 25:23

Imagine Rebekah’s confusion. Finally pregnant with Isaac’s offspring and something was terribly wrong. The fighting in her womb was intolerable. In our book, Antichrist: The Search for Amalek”, we wrote of a study about twin rivalry in the womb. It is not uncommon. 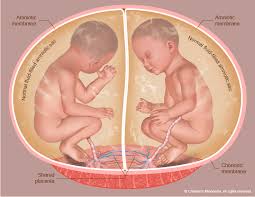 Excerpt: On December 3, 2012 ABC News published an ultrasound video showing proof that twins do indeed fight in the womb, even pointing out that one twin can dominate the
blood supply of the other by what is termed the twin-to-twin transfusion syndrome.

The condition causes the twins’ blood flow to essentially become interconnected. One baby inevitably loses out to the other, receiving less blood, and stops growing. The other baby then grows dangerously fast, putting it at risk of cardiovascular complications.” The Bible’s comment that Esau was a very red baby indicates that the twin-to-twin transfusion syndrome likely occurred and Esau was the larger baby.”

Esau was the first-born twin and the Bible records that on his way out of the womb he tried to kick his brother’s head. Jacob, in Hebrew means “seizing by the heel”, “supplanting”, “may God protect” the second born, caught Esau’s heel to stop him, as some say that could have possibly killed Jacob.

It is the last line of the prophecy God gave to Rebekah that has echoed throughout history: ‘And the older shall serve the younger’, and it is why we are still talking about it today. It was/is the older that gets the inheritance and God determined that it would go to Jacob, the younger.

Because of the trickery of Rebekah and Jacob, Isaac administered the blessing of the first born to Jacob (Genesis 27:28-29 NIV). It was an unnecessary scheme, since God had already ordained it to be. And Isaac gave a much diminished blessing to Esau (Genesis 27:39-40 NIV) whose anguished cry is still being heard today:

“So Esau hated Jacob because of the blessing with which his father blessed him, and Esau said in his heart, “The days of mourning for my father are at hand; then I will kill my brother Jacob.” Genesis 27:41

Let’s be clear. There is no way that Esau’s descendants can live in peace with Jacob’s descendants. I didn’t say that – God did.

“Jacob will be a fire
and Joseph a flame;
Esau will be stubble,
and they will set him on fire and destroy him.
There will be no survivors
from Esau.”
The Lord has spoken” Obadiah 1:18