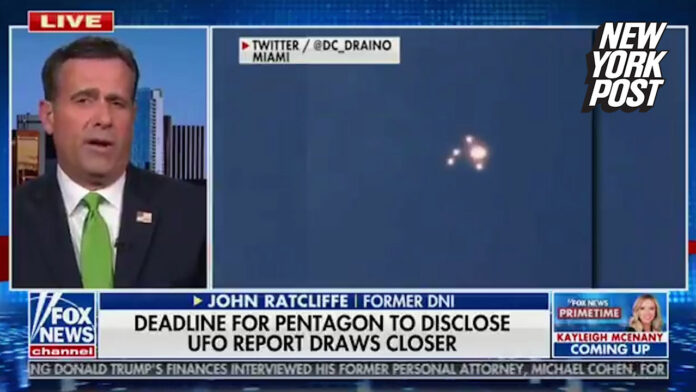 (John Lee Ratcliffe served as the Director of National Intelligence from 2020 to 2021. He previously served as the Representative for Texas’s 4th district from 2015 to 2020. During his time in Congress, Ratcliffe was regarded as one of the most conservative members)

Opinion: Before the public becomes hysterical, it is a real good idea for us to review what the Bible says about fallen angels to see if there may be a connection:

The days of Noah …

Genesis 6:4 “There were giants on the earth in those days, and also afterward, when the sons of God came in to the daughters of men and they bore children to them. Those were the mighty men who were of old, men of renown.”

Sons of God (Hebrew, b’nai haElohim) refers to a creation of God, or angels, that took the daughters of men (offspring of Adam), as wives. For that reason, there’s solid evidence  that the “sons of God” who fathered the Nephilim were fallen angels.

Genesis 6:5-6 “Then the Lord saw that the wickedness of man was great in the earth, and that every intent of the thoughts of his heart was only evil continually. 6 And the Lord was sorry that He had made man on the earth, and He was grieved in His heart.”

Jude 1:6-7:  “And the angels who did not keep their proper domain, but left their own abode, He has reserved in everlasting chains under darkness for the judgment of the great day; 7 as Sodom and Gomorrah, and the cities around them in a similar manner to these, having given themselves over to sexual immorality and gone after strange flesh, are set forth as an example, suffering the vengeance of eternal fire.”

Numbers 13:33 “There we saw the giants (the descendants of Anak came from the giants); and we were like grasshoppers in our own sight, and so we were in their sight.”

Samuel 17:4: “And a champion went out from the camp of the Philistines, named Goliath, from Gath, whose height was six cubits and a span.”

Angels can operate in different dimensions …

(Thanks to our Associate Editor for finding the interview)