Home Bible prophecy On The Verge Of A Global Crisis: One Bank Warns Of A... 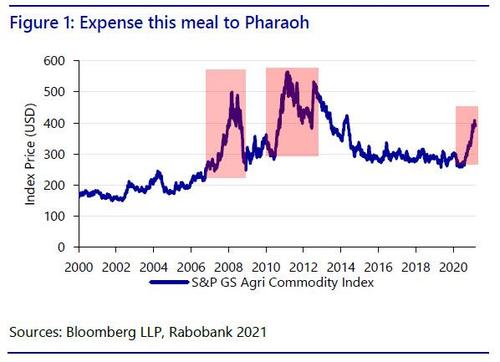 Then Pharaoh said to Joseph: “Behold, in my dream I stood on the bank of the river. Suddenly seven cows came up out of the river, fine looking and fat; and they fed in the meadow. Then behold, seven other cows came up after them, poor and very ugly and gaunt, such ugliness as I have never seen in all the land of Egypt. And the gaunt and ugly cows ate up the first seven, the fat cows. When they had eaten them up, no one would have known that they had eaten them, for they were just as ugly as at the beginning. So I awoke.” 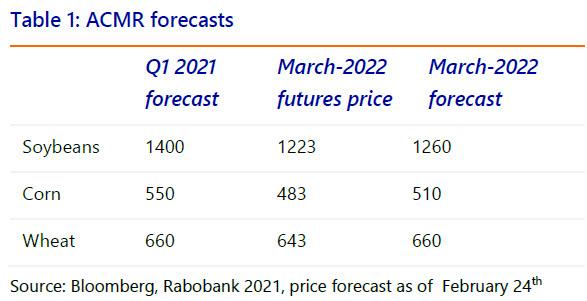 In the Bible, Joseph interpreted Pharaoh’s dream as meaning great abundance for seven years would be followed by an equal famine. He was then entrusted with ensuring Egypt’s storehouses were full of grain so the country could survive – which he, and it, did.
In short, Joseph made the first agri commodity cycle call, where survival came before profits. Today we have seed technology, automated agriculture, and global markets. Yet we still have lean and fat years for reasons meteorological, logistical, political, and geopolitical. This report will try to do several things.

Imagine what a Biblical scarcity would look like, putting forward simplified assumptions to estimate what each of them in isolation could do to food prices Read More

Opinion: Imagine my surprise to find Genesis 41 quoted by Rabo Bank’s Michael Every the Head of Financial Markets Research Asia-Pacific. We have quoted the verse often in relation to sudden price inflation.

“On March 23, 2020 the reality of the Covid-19 lockdown began to crater the global equity markets. On April 9, 2020 the Federal Reserve announced $6.8 trillion in new money along with a pledge to backstop every sector of the market: stock prices, corporate bonds, municipal bonds and commercial real estate.

Suppressed interest rates (ZIRP – zero interest rate policy) and money printing (QE -Quantitative Easing) were designed by central bankers to smooth out the economy and avoid the natural economic order – times of a slow down, or recession.

“So the plenty will not be known in the land because of the famine following, for it will be very severe. 32 And the dream was repeated to Pharaoh twice because the thing is established by God, and God will shortly bring it to pass.” Genesis 41:31-32

The nations have accumulated so much debt that the only way to keep the global economy going is to create more money. It does not take a PhD in economics to know NEW money debases the value of money already in circulation.

Hyperinflation can come suddenly, caused by the collapse of a nation’s currency Revelation 6:5-6

On March 4, Federal Reserve Chairman Jerome Powell said inflation is likely to rise as the economy recovers, but he thinks it will be temporary.

But that was yesterday, and yesterday’s gone.