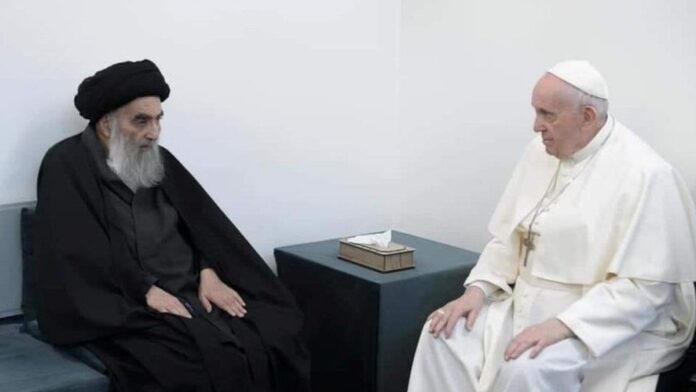 Zero Hedge: On Saturday Pope Frances traveled to the Shia holy city of Najaf while on his four-day papal visit to Iraq – the first ever such trip by the head of the Roman Catholic Church. There he held a historic and somewhat controversial meeting with the country’s top Shiite cleric, Grand Ayatollah Ali al-Sistani, amid a massive security presence.

The 90-year old Sistani is among the most senior Shiite clerics in the world, whose quiet but powerful influence has helped shaped post-US invasion Iraq. The months in the making meeting was held in Sistani’s own home. .

Pope Francis’ main message to the top Islamic cleric during the 50-minute meeting reportedly emphasized the importance of peaceful coexistence between Muslims and Christians of Iraq.

Sistani likewise “affirmed his concern that Christian citizens [who] should live like all Iraqis in peace and security, and with their full constitutional rights,” according to a subsequent press release.

And a Vatican statement further said the Pope thanked al-Sistani for having “raised his voice in defense of the weakest and most persecuted.” The dialogue itself during the meeting was kept quiet.

The meeting took place in close vicinity to the golden-domed Imam Ali Shrine, among the most revered sites in Shiite Islam. The shrine was target of a major twin car bombing in August of 2003 which killed 95 people, and later claimed by al-Qaeda in Iraq. Read More