Assessment: “A couple of words for those who would be tempted to intervene. Russia will respond immediately and you will have consequences that you never have had before in your history,” he warned.

Russian President Vladimir Putin declared war on Ukraine in a surprise television announcement at roughly 6:00 a.m. Moscow time, 10:00 p.m. Eastern. The Russian dictator described the unprovoked attack as a “special military operation for the de-Militarization and de-Nazification of Ukraine.”

“I’ve made the decision to conduct a special military operation,” Putin said. “Our analysis has concluded that our confrontation with these forces [in Ukraine] was inevitable.”

“This is the red line that I have spoken of many times. They have crossed it,” he said, accusing the Ukrainians of “genocide” for attacking the two new “independent republics” he unilaterally conjured into existence on Monday.

“Russia cannot feel safe, develop, and exist with a constant threat emanating from the territory of modern Ukraine,” he said.

Putin bizarrely claimed Russia’s plans “do not include occupation of Ukrainian territory” and “we are not going to impose anything on anyone by force,” even as Russia launched missile attacks at targets across Ukraine, including its capital city of Kyiv.

“A couple of words for those who would be tempted to intervene. Russia will respond immediately and you will have consequences that you never have had before in your history,” he warned.

(People, some carrying bags and suitcases, walk at a metro station in Kyiv early on February 24, 2022_ 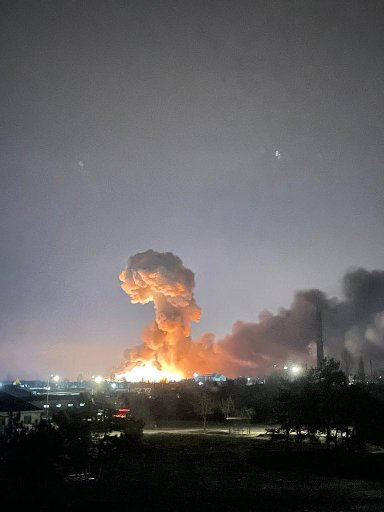 “As for the military sphere, modern Russia, even after the collapse of the USSR and the loss of a significant part of its nuclear potential, is today one of the most powerful nuclear powers. And moreover, it has certain advantages in a number of the latest types of weapons. In this regard, no one should have any doubt that a direct attack on Russia will lead to defeat and dire consequences for a potential aggressor,” he said, making it clear that he was threatening nuclear retaliation against the U.S. and NATO if they interfere with his attack on Ukraine.

“All responsibility for bloodshed will be on the conscience of the ruling regime in Ukraine,” Putin insisted, calling on Ukrainian forces to surrender.

“I urge you to immediately lay down your weapons and go home. All servicemen of the Ukrainian army who fulfill this demand will be able to freely leave the combat zone and return to their families,” he said.