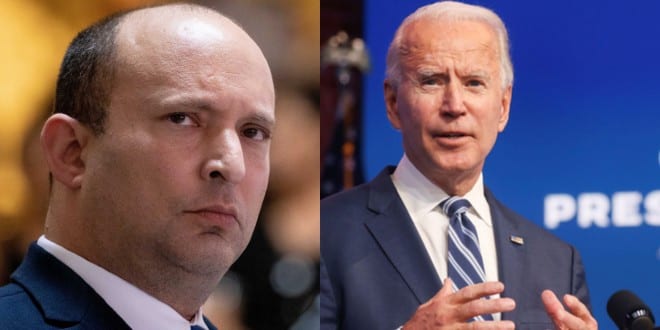 Israel 365: US President Joe Biden’s 2020 campaign promise to reopen the US consulate in East Jerusalem that was closed down during the former US President Donald Trump era. Israeli Prime Minister Naftali Bennett opposes the move, reports Channel 12 correspondent Amit Segal.

The East Jerusalem consulate, which was initially established to serve the ‘Palestinian’ population exclusively, would erase Trump’s historic accomplishment of recognizing a united Jerusalem as Israel’s capital.

A consulate in East Jerusalem would send relations between Washington and Jerusalem eight years back to the Obama era when Washington recognized Tel Aviv, not Jerusalem, as Israel’s capital. Read More …

Opinion: The collision will be between Joe Biden and God.

“I will also gather all nations, and will bring them down into the valley of Jehoshaphat, and will plead with them there for my people and for my heritage Israel, whom they have scattered among the nations, and parted my land.” Joel 3:2

Jerusalem is God’s timeclock. I heard a presentation by Pastor Andy Woods of Sugar Land Baptist Church put it like this: Israel is the hour hand, Jerusalem is the minute hand and the Temple Mount is the second hand.

The hour hand began to move on May 14, 1948. The minute hand began to move with the victory of the 1967 war when east and west Jerusalem were reunited, and when the second hand begins to move, a major event will focus the world’s attention on the Temple Mount.

President Joe Biden’s attempt to placate the Edomites of Judea and Gaza will place the United States in violation of the Abrahamic covenant.