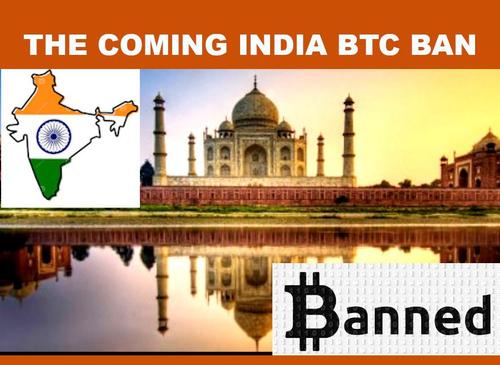 Zero Hedge: There has been talk for a few weeks now of a possible Indian bitcoin ban as well as an Indian ban of all non-State sponsored cryptocurrencies to pave the way for an RBI (Reserve Bank of India) cryptocurrency.

Now, according to the latest report from a senior Indian Finance Ministry official that stated, “Cryptocurrency isn’t fiat currency backed by the Reserve Bank of India, and its usage in all forms will be banned through the new law that will be introduced in Parliament,” India will pass legislation soon that will ban cryptocurrencies within the nation, a decision that will obviously significantly impact 7 million Indians that collectively hold more than $1 billion in cryptos.

However, the details of the ban are still lacking. Will only trading be banned, or will ownership be banned as well? And if ownership is banned, will the Indian bitcoin ban try to force conversion of BTC and all other cryptocurrencies back into rupees, as was attempted with a Modi-led 2016 gold demonetization plan (that thank God, for Indian citizens, miserably failed)?

For years, my warnings about a country passing legislation to ban bitcoin have largely been ignored, even in this article I published more than eight years ago in which I explicitly stated, I “believe it is inevitable that bankers will attack the BTC network” that would pave the way for its banned use within nations’ economies.  Read More …

Opinion: We have said that here, here and here for over 3 years. What we don’t know is when cryptocurrencies will be banned or from what level. Commodity mania can rise and fall way beyond what most analysts predict.

Working backwards from what we know will happen…

He causes all, both small and great, rich and poor, free and slave, to receive a mark on their right hand or on their foreheads, 17 and that no one may buy or sell except one who has the mark or the name of the beast, or the number of his name.” Revelation 13:16-17

The he in the passage is Antichrist who will have such control of the global economy that every transaction on the face of the earth will be accounted for. For that to happen cash must disappear, hundreds of digital coins already in existence must disappear, central bank digital currency (CBCD”s) must take back control, and a future consolidation of central banks will necessarily take place until there is only one, under control of the he.

One central bank digital entry. Now that is control.