Assessment: it seems President Joe Biden took the opportunity to continue with an alarmist posture as he told his Ukrainian counterpart Volodymyr Zelenskiy that a Russian invasion is “now highly certain” …

In their Thursday afternoon phone call which the White House called “a check-in”, it seems President Joe Biden took the opportunity to continue with an alarmist posture as he told his Ukrainian counterpart Volodymyr Zelenskiy that a Russian invasion is “now highly certain” – according to CNN.

Further, “President Biden reaffirmed the readiness of the United States along with its allies and partners to respond decisively if Russia further invades Ukraine,” according to the White House call readout. But it remains that two conflicting narratives have emerged, given just prior to the call it was being reported that Zelensky was expected to request that the US be more cautious in its messaging surrounding a potential Russian attack, per source–particularly the word “imminent,” as it risks causing panic and negative economic consequences for Ukraine. That was also according to CNN.

In their Thursday afternoon phone call which the White House called “a check-in”, it seems President Joe Biden took the opportunity to continue with an alarmist posture as he told his Ukrainian counterpart Volodymyr Zelenskiy that a Russian invasion is “now highly certain” – according to CNN. 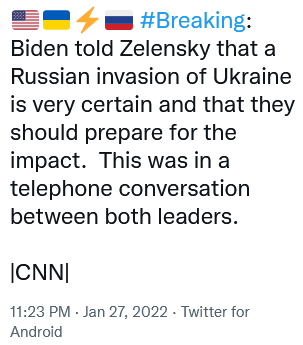 “Discussed recent diplomatic efforts on de-escalation and agreed on joint actions for the future,” Zelenskiy said in a tweet. “Thanked President Joe Biden for the ongoing military assistance,” he said, also affirming that the US offered further financial support to Ukraine, which was highlighted in the Biden statement.

CNN and mainstream media in general have of late seemed intent on hyping and stoking tensions to the point of armed conflict.

The “long phone conversation” with Biden was Zelensky’s second one this month. Again, compare the low key statement of Ukraine’s president himself with what Biden reportedly said to him concerning the “level” of the threat, supposedly with Kiev itself in the crosshairs…

The Ukrainian side appears to have leaked that Biden informed Zelensky that it’s “virtually certain” that Ukraine’s capital could be “sacked” and that Russian forces are looking to occupy it.

Zelensky has been particularly concerned about the US’ rhetoric that war could be “imminent” — a word White House press secretary Jen Psaki used earlier this week to describe the US’ assessment of Russia’s plans — and the recent disclosures of intelligence to US media, the source said, which “is causing panic and economic disaster for Ukraine.”

Zelensky is expected to convey to Biden that he believes the US and its allies have to be more careful with their messaging surrounding the conflict, the source added.

It seems the two leaders were openly at odds over the true level of the threat, with the White House now being accused of grossly inflating the threat. Indeed this has been the messaging of the Ukrainians all week, especially after the US took the dramatic step of telling some of its embassy staff in Kiev to leave the country over the Russian troop build-up near Ukraine.

On this issue, Biden had some explaining to do which likely didn’t make matters any better. Biden “made clear that despite the departure of American family members of embassy personnel, the U.S. Embassy in Kyiv, remains open and fully operational,” according to the US readout.