Home anti-Semitism US: Israel should avoid unilateral steps with Palestinians 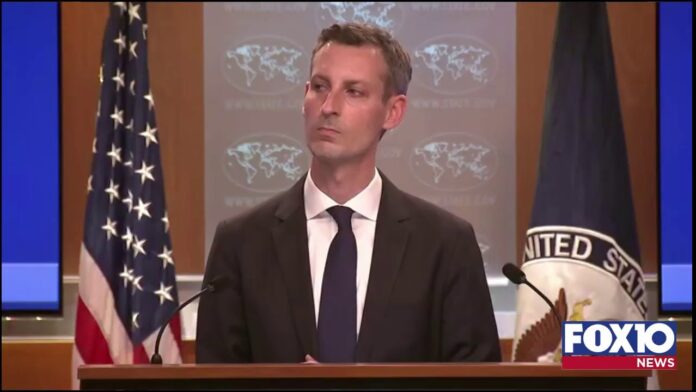 Israel Hayom: The US “encourages” Israel to avoid unilateral steps that “exacerbate tensions and make it difficult to preserve the viability of a two-state solution,” spokesman Ned Price said Monday at a press briefing in response to a question about Israeli plans to expand a settlement north of Bethlehem.

Price was also asked about the US position on UNRWA, whose funding former President Donald Trump slashed.

“We intend to provide assistance that will benefit all Palestinians, including refugees. We are in the process of determining how to move forward on resuming all forms of that assistance consistent with US law,” Price responded.

Asked whether the Biden administration’s State Department had reversed former Secretary of State Mike Pompeo’s determination that Israeli settlements are not necessarily illegal, Price responded that the US encouraged both Israel and the Palestinians to avoid unilateral steps. Read More …

Opinion: Seems as though Ned Price likes the word ‘unilateral’ which is defined as ‘any doctrine or agenda that supports one-sided action.’

Translation: Israel should avoid doing what is best for its people in its God-given land.

And actually, thanks to Barack Obama and his UN Ambassador Samantha Power, Israel building homes for its citizens in Judea and Samaria is illegal:

The following series of moves by the Obama/Kerry team, in conjunction with the United Nations and the Vatican, led to the carefully orchestrated UN Security Council vote:

For what now seems like a brief moment, Donald Trump placed Israel in control of its capitol and heartland. In two short months the tide is changing right before our eyes. And now the nation that supported Israel’s rebirth in 1948 is turning against her, and placing itself as a protector of Edom rather than of Jacob.

Even though Edom has said,
“We have been impoverished,
But we will return and build the desolate places”

But God will have none of that.

That the US will be aiding and abetting in the ‘territory of wickedness’ leaves little doubt as to why there is no nation resembling the US in prophecy.