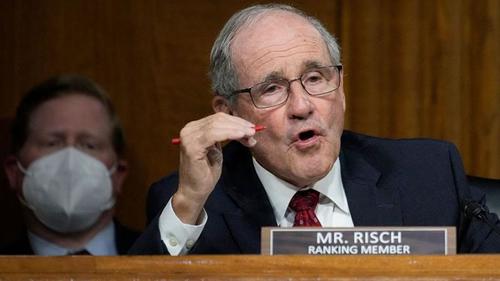 Zero Hedge: Republican Senator James Risch demanded Tuesday to know who is in charge of cutting off Joe Biden’s microphone when he goes off script, as has been witnessed several times over the past few months.

During a hearing before the Senate Committee on Foreign Relations, Risch  asked Secretary of State Anthony Blinken who is “calling the shots?”

“One of the things we need to get to the bottom to is who is responsible for this? Who made the decisions?” Risch said, referring to Biden’s Afghanistan debacle.

The Senator then added that Biden “can’t even speak without someone in the White House censoring it or signing off on it.”

The first line of questioning to Secretary of State Antony Blinken from a Senate Republican during today's hearing is Jim Risch bizarrely grilling Blinken about who in the White House has authority to "push the button" & cut off President Biden's mic. Blinken insists nobody does pic.twitter.com/kWTmitvOXE

The incident Risch was specifically referring to happened a few days ago:

BIDEN: “Can I ask you a question?”