Home PT Middle East What the row over caricatures of Yasser Arafat tells us about Palestinian...
Facebook
Twitter
Email

Assessment: “We plan to eliminate the state of Israel and establish a purely Palestinian state. We will make life unbearable for Jews by psychological warfare and population explosion. We Palestinians will take over everything, including all of Jerusalem.” —Yasser Arafat, 1996

In totalitarian states, artistic depictions of leaders are by definition sycophantic. From the Soviet Union’s Joseph Stalin to North Korea’s Kim Jong-un, from “Chairman Mao” of China to Iraqi dictator Saddam Hussein, the official portraits of those who wield near-unlimited power invariably show them as steely-jawed and commanding the love of their people; as strong and paternal; and as courageously unwavering in their convictions.

In Arafat’s case, his 1974 address to the U.N. General Assembly, when he wore his pistol bolted to his waist, or any of the numerous occasions when he flashed a victory sign at photographers would be appropriate subject matter for this style of art.

” “Because the Lord has sworn: the Lord will have war with Amalek from generation to generation.” Exodus 17:16 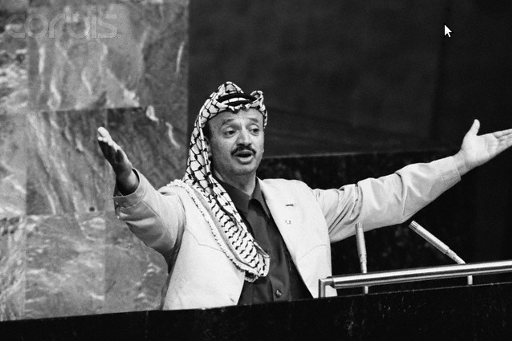 Less so was the case with the portraits of Arafat chosen for display at the museum in Ramallah. Photographs of some of them were shared on Twitter by the Palestinian journalist Khaled Abu Toameh, and the selection on display might be described as underwhelming.

There is a drawing of Arafat with an olive branch clenched between his teeth, another showing him adjacent to the Al-Aqsa Mosque in Jerusalem, and another of Arafat wearing a carefree grin beneath his keffiyeh. One might conclude that there is some gentle mockery in these caricatures, though nothing that could be considered insulting, and certainly nothing that could be construed as a slur on either Arafat’s Arab nationality or his Muslim faith—a marked divergence from the anti-Semitic tropes and Nazi imagery that routinely accompanies Arab and even some Western caricatures of Israel’s elected leaders.

But when the Ramallah exhibition, unimaginatively titled “Palestine and Yasser Arafat,” opened to the public last Sunday, not all the works met the loyalty standard such art demands. The exhibition’s purpose—“solidarity with Palestine and the roots of Yasser Arafat’s memory in the international community”—didn’t preclude less conventional artistic representations, but that made no difference. A row duly broke out, manifesting on ideological and party lines, and reflecting the fractured personal relations between some Palestinian leaders.

Less so was the case with the portraits of Arafat chosen for display at the museum in Ramallah. Photographs of some of them were shared on Twitter by the Palestinian journalist Khaled Abu Toameh, and the selection on display might be described as underwhelming.

The exhibition lacked “honesty in representing Yasser Arafat,” said Nasser al-Kidwa, a veteran Palestinian diplomat and former head of the Yasser Arafat Foundation before he was sacked last year following a bitter disagreement with the Fatah movement. On this occasion, though, Fatah agreed with al-Kidwa’s assessment.

“The insult to Yasser Arafat is an insult to all the Palestinian people,” it declared, before delivering a threat: “We therefore call upon the Yasser Arafat Foundation to remove all the insulting works and apologize, or we will have to remove them ourselves.”