Home PT World Order Will there be another EU ‘exit’ – over homosexuality? 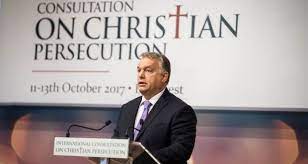 WND: Respect LGBT rights or get out of the EU, Dutch Prime Minister Mark Rutte instructed Hungary’s Viktor Orban at last week’s gathering of the European Union in Brussels.

According to Reuters, attendees described it as the “most intense personal clash among the bloc’s leaders in years.”

What caused the clash?

Hungary just passed a law that bans schools from using materials seen as pro-homosexuality. According to the AP, the new law “prohibits sharing content on homosexuality or sex reassignment to people under 18 in school sex education programs, films or advertisements.”

Rutte eagerly related details of his confrontation with Orban: “It was really forceful, a deep feeling that this could not be. It was about our values; this is what we stand for.”

“I said, ‘Stop this; you must withdraw the law, and if you don’t like that and really say that the European values are not your values, then you must think about whether to remain in the European Union.'” Read More…