Home anti-Semitism Bahrain Reverses Acceptance of ‘Made in Israel’ Label on Goods from Judea,... 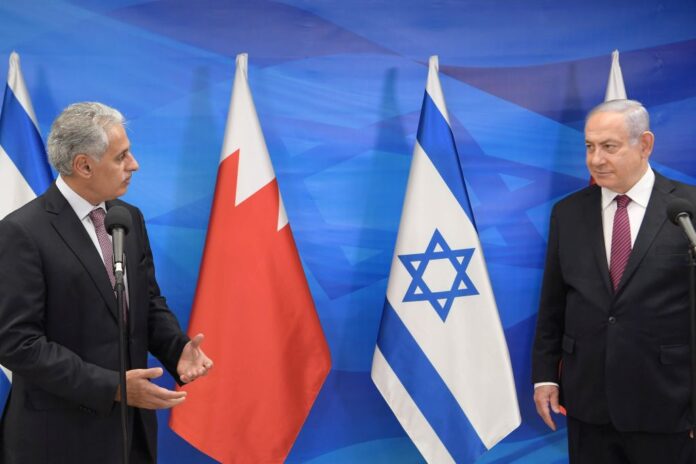 Jewish Press: Bahrain’s Ministry of Industry, Commerce and Tourism on Friday reversed the statement made just a few days earlier this week by Minister Zayed bin Rashid al-Zayani in which he said Bahrain will import goods labeled “made in Israel” that are produced in Jewish communities in Judea, Samaria and other post-1967 areas.

Bahrain: Okay to Label Goods from Judea, Samaria, Jerusalem as ‘Made in Israel’

Al Zayani said during an official trade visit to Israel, “Without going into details and border lines, Israeli products or services . . . will be treated like Israeli. . . We will recognize them as Israeli products. We will treat Israel and Israeli companies like we do Italian or German or Saudi companies, for that matter,” he said. “Israelis are as welcome as any other international company in Bahrain.”

“The alleged comments … totally contradicted his country’s (Bahrain) supportive position of the Palestinian cause.”

To fully comprehend the ridiculous explanation made by the Bahrain News Agency take a trip with me back to the closing days of the Obama administration:

On September 30, 2016, President Obama spoke at the funeral of former Prime Minister Shimon Peres. A transcript released from the White House listed the location of the speech as:

Hours later a corrected transcript showed the location as:

That correction demonstrates the Arab/UN/EU/Progressive left/anti-Israel/pro-Palestinian position that is the two state solution. The land Israel captured in the 1967 defensive war must be given back as a Jew-free state for Arabs.

Judea and Samaria are known by progressive leftists and Arabs as ‘occupied land’ despite the fact that this land contains Israel’s God-given heartland and Temple Mount (east Jerusalem), and that no nation has ever given back land taken in a defensive war.

In 1967, Egypt, Syria and Jordan launched a war to end the Jewish state permanently. In an astonishing and miraculous victory, Israel smashed the three Arab nations in 6 days and captured the Temple Mount.

In June 1967, Israel was once again compelled to fight for its existence. The third war forced upon Israel was also the shortest. Israel succeeded against all odds and prevailed over the armies of its three most powerful neighbors, which threatened to strangle it from the south, east and north. Jerusalem, Israel’s capital, was reunited. For the first time in 19 years, the Old City was open to believers of all faiths and Jews could access their holiest sites.

The peace between Bahrain and the UAE and Israel will likely fall apart. The prophesied person to confirm peace in the Middle East is found in Daniel 9:27 …

“Then he shall confirm a covenant with many for one week;
But in the middle of the week
He shall bring an end to sacrifice and offering.
And on the wing of abominations shall be one who makes desolate,
Even until the consummation, which is determined,
Is poured out on the desolate.”

…and he has not taken the world stage yet.