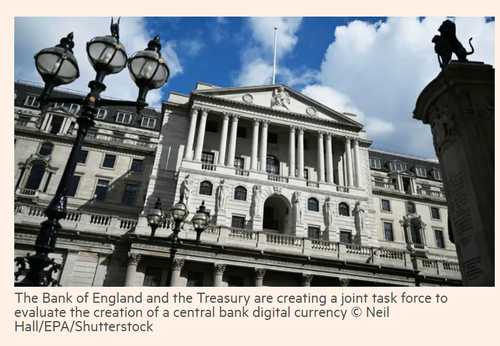 Zero Hedge: About a year ago the Bank of England released a paper on the Opportunities, Challenges, and Design of Central Bank Digital Currencies.

The idea that one can future proof fiat currencies against anything is of course ludicrous.

British finance minister Rishi Sunak told the Bank of England on Monday to look at the case for a new “Britcoin”, or central bank-backed digital currency, aimed at tackling some of the challenges posed by cryptocurrencies such as bitcoin.

A BoE-backed digital version of sterling would potentially allow businesses and consumers to hold accounts directly with the bank and to sidestep others when making payments, upending the lenders’ role in the financial system.

“We’re launching a new taskforce between the Treasury and the Bank of England to coordinate exploratory work on a potential central bank digital currency (CBDC),” Sunak told a financial industry conference.

What About Physical Cash?

The BoE said a digital version of sterling would not replace either physical cash or existing bank accounts.

Q: Once central banks can track every penny, guess what?

A: They will track every penny

Governments will know where every penny is coming from and going to and tax everything.

They will sell this scheme as a necessity to combat drugs, tax evasion, and a necessity for fairness. Read More