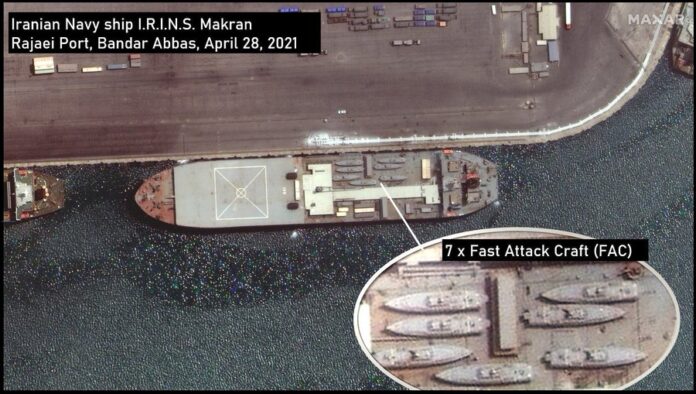 And Magazine: Teddy Roosevelt used to carry a big stick and speak softly. Joe Biden carries no stick and mumbles incoherently. The Iranians know that, and they plan to take full advantage.

Even as negotiations regarding a new nuclear deal drag on and Iran prepares to once again fleece the spineless American negotiating team, two Iranian ships are rounding the tip of South Africa and entering the Atlantic. Their destination? Venezuela. Their cargo? Sophisticated weapons for Maduro, which will pose a direct threat to the United States.

“And He changes the times and the seasons; He removes kings and raises up kings; He gives wisdom to the wise And knowledge to those who have understanding.”

The Iranian navy sea-ship Makran and the Iranian’s most modern warship Sahand have just rounded Africa’s Cape of Good Hope. Iranian vessels do not operate in the Atlantic, so this is an unprecedented and obviously significant development. What is even more significant is what the Makran is carrying.

According to a well-placed AND Magazine source with access to multiple sub-sources inside Iran, in addition to the high-speed missile boats visible in imagery on the deck of the Makran, that vessel is carrying surface to surface missile systems and the missiles to be launched from those systems. Many of the components for these systems are disassembled and distributed in unmarked crates within the ship so as to be harder to detect and identify.

AND Magazine’s source is also in possession of information strongly suggesting but not yet confirmed that the Makran is carrying sophisticated Iranian drones as well for delivery to Venezuela. These drones are claimed to have the capacity to evade detection by American and allied forces. Once in possession of these drones, Venezuela would then presumably have the capability to launch attacks in the Western Hemisphere. Read More …

Opinion: For years Bible teachers have debated whether America is found in prophecy. Ezekiel 38:13 NIV is at the center of the debate.

“Sheba and Dedan and the merchants of Tarshish and all her villages will say to you, “Have you come to plunder? Have you gathered your hordes to loot, to carry off silver and gold, to take away livestock and goods and to seize much plunder?” Ezekiel 38:13 NIV

Jack Kelley, GracethruFaith (.com): “The Phoenicians sailed as far north as England for tin, a metal used in the making of bronze and other alloys, which they mined in Cornwall, and which leads some to connect Tarshish with England. It may be that the name Britannia is actually derived from a Phoenician word meaning “source of tin.”

If so, this reference could be to Great Britain making the “lions” (KJV) or “villages” (NIV) of Tarshish Great Britain’s colonies, of which the US is most prominent today. The fact that the lion is a symbol of the British Empire lends support to this view”

If so, Britain, the United States and Saudi Arabia will be powerless to stop the Russia, Iran, Turkey and North Africa prophesied attack on Israel to take her great wealth and wipe out the Jewish state once and for all.

If so, arming enemy dictators like Nicolas Maduro with sophisticated weapons could be one cause for Americas fall.

And if so, God will be Israel’s only protector, which is precisely what Ezekiel calls for.

“This is what will happen in that day: When Gog attacks the land of Israel, my hot anger will be aroused, declares the Sovereign Lord…” read more in Ezekiel 38:19-23.