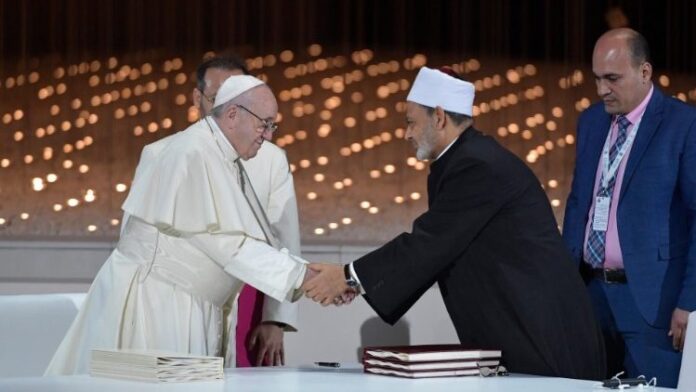 JD: Pope Francis back in February of this year was in Abaya Dubai and there he met with a Imam from the Sunni set of Islam the most important Imam in that set. They not only met but they signed a Covenant, a key Covenant that brings these two religiosity together. It sounds very prophetic to me so I wanted to talk to you about it.

MG: Well its a meeting that I believe will be the catalyst for the convergence of Islam and Roman Catholicism. But in the Catechism of the Catholic Church that came out of 1998 says the plan of salvation also includes those who acknowledge the Creator in the first place to amongst whom are the Muslims. So we wonder why would the Roman Catholic Religion single out Islam as a part of God’s plan of salvation.

I think we can just expect that when you look at 1.3 billion Catholics and maybe 1.6 billion Muslims if you combine the two religions together that represents 3 billion people or about 40% of the world’s population. So I believe as you see these two religions coming together the rest of the religions will follow suit to form a global religion that will one day worship Antichrist.

JD: They both have a desire for a worldwide dominion.

MG: Well it’s true they both rule with a autocratic government. They have a history of forced conversions and killing those who oppose them. So its amazing that we know that the ultimate global government and global religion will but to death those who stand opposed to the global religion. So this may be a precursor, these two religions coming together indoctrinating people, intimidating them. Under the fear of death many will come to take the mark of the beast and worship the Antichrist.

JD: Mike Gendron with the details on an effort to form a worldwide kingdom under Antichrist.

Mike’s report is a reflection of reality as the Pope works to pull together Islam and Catholicism. As we read from God’s prophetic word the plan laid out for the future as foretold there in Revelation 17 says that the Roman church is key to this prophetic scenario, Ezekiel 38, Daniel 11, and Psalm 83 tells us of the importance of the Islamic world in the last days as well. The stage is set for Bible prophecy to be fulfilled.

Note to Readers: The aftermath of Covid-19 left many ministries in need of financial help. Please consider a donation to Prophecy Today HERE