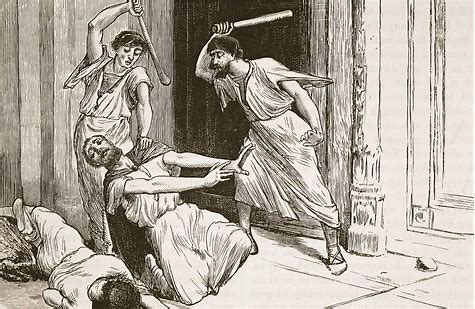 And Magazine: Tiberius Gracchus was a Roman politician and official in the Second Century BC. Gracchus was a member of the populares, a faction that sided with the plebian – the common people – against the conservative aristocratic patricians who had traditionally held power in Rome. At the time of Gracchus the small independent farmers of the Roman Republic were increasingly feeling economic pressure from the concentration of public lands into giant estates held by aristocrats. Rome, a nation whose strength had also been built on a class of free, independent men was now increasingly owned and controlled by a strata of oligarchs.

Tiberius Gracchus proposed reforms to break up the giant estates and redistribute the land to average Romans. He was vehemently opposed to the aristocrats and made no secret of his intention to destroy their power. He was aggressive. He was loud. He threatened the entire power structure of those who believed the Republic belonged to them.

In 132 BC Tiberius proposed to run for reelection to the office of tribune, a powerful Roman administrative position with the charter to represent the plebians. In doing so, he appeared to violate a tradition that barred an office holder from seeking reelection. The Roman Senate, the epicenter of the power of the oligarchs, was terrified at the prospect that Gracchus would run again and that the reforms he proposed might fundamentally change Rome and bring to an end their control over Rome’s government and society.

Gracchus had to be destroyed by any means necessary. On the pretext that he intended to make himself king he was attacked in a public marketplace and beaten to death by a mob led by Roman Senators and their allies. Read More …

Opinion: The most viscous attacks on President trump began before inauguration day. From Obama operatives spying on the in-coming administration, to set ups with phony Russian spies, to Democrats refusing to attend the swearing in, to phony dossiers to accusations of being a Russian puppet, to comparisons to Adolf Hitler, Donald Trump had to be destroyed.

Donald Trump touched the third rail of the Democrat Party on nearly every domestic and international issue.

“Donald Trump did not incite a mob to storm Capitol Hill. He did not lead an insurrection. He did not advocate violence. He did something infinitely worse. He threatened the ruling class of this nation.”

For all that, the progressive left wants blood. The killing of Tiberius Gracchus is playing out again …

“What has been will be again,
what has been done will be done again;
there is nothing new under the sun.” Ecclesiastes 1:9