Home Bible prophecy Mary, A Model For Faith And Life For Christianity And Islam 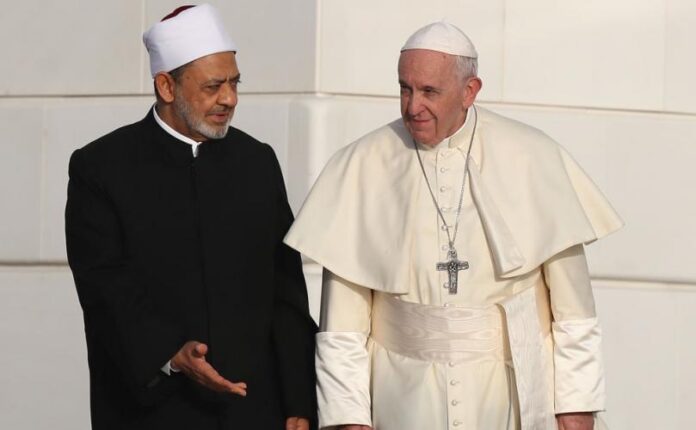 LifeSite News: Starting on February 18, ten weekly conferences will be given jointly by Catholic and Muslim speakers who will seek “dialogue, knowledge and cooperation” regarding themes such as “Mary, a woman of faith,” “God who is love and faith,” prayer, purity, hospitality and non-violence, fasting and penitence, fraternity and citizenship.

The Franciscan pontifical University of Rome, the “Antonianum,” is another co-organizer of the event through its Duns Scot Chair of Mariological Studies as well as the International Islamic-Christian Marian Commission and the Grand Mosque of Rome and its Islamic Cultural Center of Italy.

The Italian weekly Famiglia Christiana presented the event in the light of the Abu Dhabi declaration, illustrating its article on Saturday with a photo of Pope Francis signing the Human Fraternity Document together with Imam al-Tayyeb of the Al-Azhar University of Cairo.

Opinion: Does anyone else see the formation of a new religion, i.e. not really Catholic and not really Muslim?

1,400 years ago, Muhammad hijacked Jesus (Isa) from the gospels, demoted him to prophet, and placed him in the Koran, along with his mother Mary. Christianity was Islam’s main competition at the time, and Muhammad seems to have reasoned that it was better to co-opt Jesus and His mother than to denounce them.

It is Shia eschatology that calls for Isa, son of Mary, to remove and break crosses when he comes as the deputy of the 12th Imam, or the Mahdi. Isa will tell Christians that Islam has been the correct path and he will tear down steeples with crosses all over the world.

It is eschatology, study of the last things, that Muslims understand and study – and Catholics and liberal Christian denominations mostly ignore: It’s too depressing, or, I just don’t want to hear that stuff, or, only the fringe kooks believe that.

It is the same Shia messiah, also known as the “Twelfth Imam” or the “Mahdi” that Iranians believe will appear soon to establish a global Islamic kingdom known as the caliphate. The Koran mimics the Bible with an Islamic figure who arrives on earth during a time of great turmoil.

Assuming some one in the Vatican knows this, the new religion being formed is with the full knowledge of the pontiff…

‘Then I saw another beast coming up out of the earth, and he had two horns like a lamb and spoke like a dragon.” Revelation 13:11

Starting today, ten weekly conferences will be given jointly by Catholic and Muslim speakers who will seek “dialogue, knowledge and cooperation” regarding themes such as “Mary, a woman of faith,” “God who is love and faith,” prayer, purity, hospitality and non-violence, fasting and penitence, fraternity and citizenship.

I won’t hold my breath waiting to see if Isa son of Mary is one of the ten conferences.