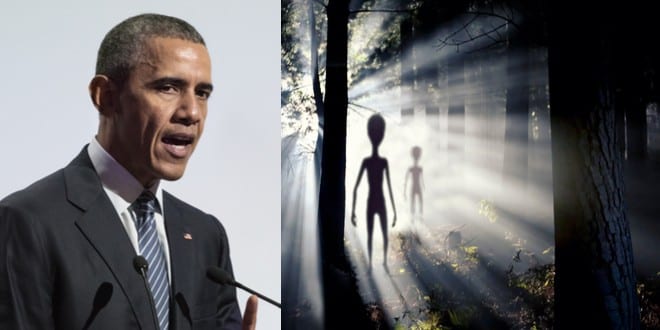 Israel 365: In a spate of recent interviews, former President Barack Obama repeatedly discusses UFOs. Obama claims that concrete proof of extraterrestrial life would not change any of his beliefs but would probably lead to the creation of “new religions.” What Obama is clearly not aware of is that the Bible already addresses the subject.

“It’s interesting. It wouldn’t change my politics at all,” Obama said in a podcast interview on the Ezra Klein show last Tuesday. “Because my entire politics is premised on the fact that we are these tiny organisms on this little speck floating in the middle of space.”

Normally, such conjecture by a former president would be considered decidedly abnormal. However next month, the Office of the Director of National Intelligence and Secretary of Defense will be required to provide the intelligence and armed services committees of Congress with an unclassified report on “unidentified aerial phenomena.”

Obama does, in fact, believe that the sightings are genuine and may indicate alien origins. In another recent television appearance on the Late Late Show, Obama said as much: Read More …

Opinion; You may not believe what I am about to say. Barack Obama is right. New religions (with old names) have already formed, not because of proven UFOs, but because of his presidency.

2008: “I believe that marriage is the union between a man and a woman,” he told Rick Warren’s flock of Evangelicals. “Now, for me as a Christian, it’s also a sacred union. God’s in the mix.”

2015: “I always felt that same–sex couples should be able to enjoy the same rights, legally, as anybody else.”

Today, the Presbyterian Church (USA), the Episcopal Church, and the Evangelical Lutheran Church of America have not only redefined marriage, but the Lutherans have the first openly transgender minister.  Because of Barack, new religions have formed in apostasy.

The Nephilim and LGBT connection:

Matthew’s account follows with “For wherever the carcass is, there the eagles will be gathered together” depicting spiritual corruption and judgment. In the days of Noah, giants (Nephilim) were on earth (Genesis 6:4). Fallen angels who cohabited with daughters of men producing men of renown, and God destroyed the earth by flood;

Today UFO’s or UAP’s are being discussed in major headlines daily.

Luke’s account follows with “Likewise as it was also in the days of Lot: “They ate, they drank, they bought, they sold, they planted, they built; 29 but on the day that Lot went out of Sodom it rained fire and brimstone from heaven and destroyed them all. 30 Even so will it be in the day when the Son of Man is revealed.”

Today the Homosexual agenda is consuming the west.

Both accounts precede judgment (tribulation) before the second coming of Messiah.