Home anti-Semitism Palestinian woman amid riots: “We’ll sacrifice our lives for the sake of... 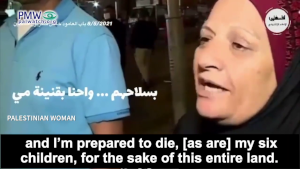 The PA and Fatah have been encouraging Palestinians to continue the riots in Jerusalem and even to seek death as “Martyrs” for Jerusalem, addressing them in songs as “self-sacrificing fighters” and calling on them to “redeem Jerusalem with their lives.” And this message – which is not new – has come across and been embraced by Palestinians. Amid the violent Arab riots in Jerusalem, a Palestinian woman told Palestinian Authority TV: “I’m prepared to die, [as are] my six children, for the sake of this entire land”:

“Behold, I will make Jerusalem a cup of trembling unto all the people round about, when they shall be in the siege both against Judah and against Jerusalem.” Zechariah 12:2

Opinion: Muslims not only desire the Temple Mount because of the Al Aqsa Mosque, the third holiest site in Islam, but they desire the Wailing Wall (Western Wall) known as “al-the Buraq Wall”, for on the other side (the Muslim side of the Wailing Wall) on the Temple Mount) is where Muhammad (supposedly) tied the Buraq, the riding animal upon which he rode during the Night of Ascension to Allah.

Think about it. Israel is now officially alone. The nations that pretend to care about her security are more interested in the Arab demands for a capital in Jerusalem. President Biden is SO concerned he sent the assistant deputy Secretary of State (5th in line) to handle the 3500 year old blood feud; followed by White House Press Sec. Jen Psaki repeating the 1967 failed two state solution mantra.

And Satan is pleased. Disrupt Israel and destroy the Jews, and he can prevent the second coming of Messiah.

Satan will fail when Jesus returns…

. … and the blessing of Jacob is fulfilled:

“Thus says the Lord of hosts: ‘In those days ten men from every language of the nations shall grasp the [a]sleeve of a Jewish man, saying, “Let us go with you, for we have heard that God is with you.” Zechariah 8:23