PJ Media: During a town hall meeting in Washington:

What I’m fearful of — because Rashida [Tlaib] and I are Muslim — that a lot of our Jewish colleagues, a lot of our constituents, a lot of our allies, go to thinking that everything we say about Israel to be anti-Semitic because we are Muslim.

Not everything. Just those things you say that are blatantly anti-Semitic.

To me, it’s something that becomes designed to end the debate because you get in this space of – yes, I know what intolerance looks like and I’m sensitive when someone says, “The words you used, Ilhan, are resemblance of intolerance.” And I am cautious of that and I feel pained by that. But it’s almost as if, every single time we say something regardless of what it is we say… we get to be labeled something. And that ends the discussion. Because we end up defending that and nobody ever gets to have the broader debate of what is happening with Palestine.

“What is happening with Palestine” is an entirely different matter than this. Omar concluded:

So for me, I want to talk about the political influence in this country that says it is okay to push for allegiance to a foreign country. more …

Opinion: Somalia is a Cush nation and Ilhan Omar is from Somalia.

Cush (eldest son of Noah’s son Ham) settled in the area of Sudan, Ethiopia, Somalia. Keep in mind that Noah and his sons/grandsons were Gentiles. There were no Jews until Abraham 1997 BC. 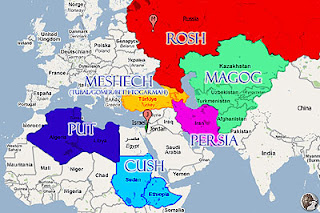 Ezekiel 38:1-6 lists an alliance led by Russia, Iran and Turkey that will attack Israel from the north and east in the last days. At least 4 African nations (Cush and Put) attack from the south and west. All 7 nations will be judged after the attack (Ezekiel 39:6).

Numbers 12:1 which says Miriam and Aaron spoke against Moses because of his Cushite wife. Some say this identifies her as a descendant of Noah’s grandson Cush. The Hebrew word Cush means black, and Cush is said to be the father of the black African people.

A characteristic of each familial line apart from Abraham, Isaac, and Jacob is self-loathing of Jewish partial blood. (see our book Antichrist: The Search for Amalek)