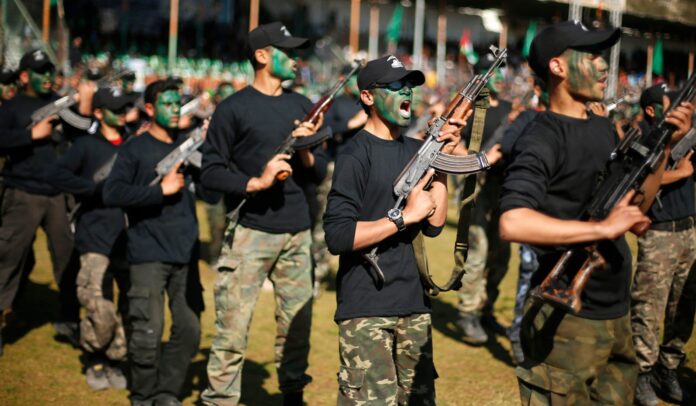 All the academics who sign statements of solidarity with “Palestine” claim to have done so out of a deep respect for human rights. Their advocacy for Palestinians and refusal to acknowledge Israel’s right to exist received a great deal of attention in June, but their silence regarding the villains who train, equip, and brainwash Palestinian children into becoming child warriors has gone mostly unnoticed for many years. Since these academics don’t seem to care about the human rights of Israelis, they should consider what role they play in denying the rights of Palestinian children.

“Train up a child in the way he should go,
And when he is old he will not depart from it.” Proverbs 22:6 KJV

Every summer since the Oslo Accords, reports have come out of Gaza about the summer camps for children, and every year the reportage gets more elaborate. This summer’s camps run by Hamas and Palestinian Islamic Jihad (PIJ) are the subject of a recent MEMRI report demonstrating that they are nothing more than terrorist training camps for children. Today’s uncritical supporters of “Palestine” should worry that they are lending tacit support to the indoctrination and weaponization of child warriors.

This year’s theme at Hamas camps is “Sword of Jerusalem,” which is how the terror organization refers to the eleven days of warfare in May during which 4,600 missiles were launched from Gaza at Israel. There are four divisions this year: one for junior-high-school students, one for high-school students, another for university students, and a fourth division for adults, presumably the slow learners of the Palestinian resistance. From child soldiers to adolescent warriors to young adults on the brink of a career in violence, Hamas camps have everyone covered.

PIJ, the other terror organization that controls life in Gaza, has its own summer camps for children, operating in the summer of 2021 under the slightly more optimistic theme “Sword of Jerusalem — the Promise Draws Near.” Read More

100,000 Muslims promise to give their lives for Al Aqsa