SUNDAY STUDY: The Gates of Jerusalem

There are eight gates – seven are open and one is sealed

Ezekiel 10:19 tells us that the glory of the Lord left the Temple through the East Gate and it will return in the same way. The Messiah will return to Jerusalem through this gate (Ezekiel 43:2-4).

It was pointed out to the prophet that the Eastern Gate will be closed and will remain closed until the Messiah returns (Ezek. 44:1-3).

It was closed in the 1500’s when the Muslim leader, Suleiman the Magnificent, rebuilt the walls of Jerusalem that stand to this day. The Muslims know the Jewish Messiah will come through this Gate, so they filled it with 16 feet of cement. They also know a Gadol Cohen (High Priest) can’t walk in a graveyard so they placed a Muslim cemetery to bury their dead there.  It covers the slope down to the Kidron Valley (also called the Valley of Jehoshaphat).

On the interior (western side) of the Gate is an elaborate structure that includes domed chambers that may be entered from steps leading down from the Temple Mount.(see below). This lower area is currently used by for Muslim meeting rooms. 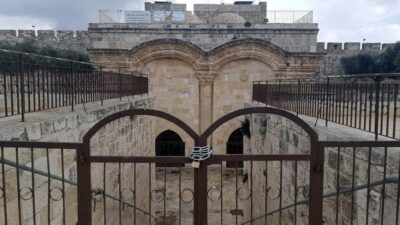 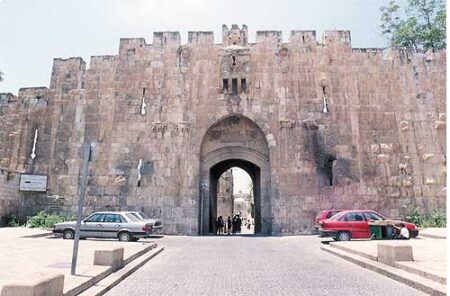 2. LION’S GATE – The Lions Gate is also known as St. Stephen’s Gate, it is the location that Paul (Saul) witnessed the stoning of Steven. The Lion’s Gate is located in the east wall, and leads to the Via Dolorosa. Near the top of the Lion’s Gate are four figures of lions, two on the left and two on the right. Israeli paratroopers from the 55th Paratroop Brigade came through this gate during the Six Day War in 1967. 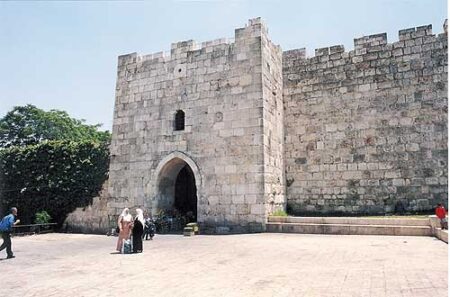 Despite its name, the notorious Judean king had nothing to do with this gate. Christian pilgrims of the 16th and 17th centuries thought that a structure near this gate (now identified as a house built in the Mamluk Period, c.1250-1517) was the former palace of Herod the Great. Although the early pilgrims were incorrect, the name has stuck.

In Arabic and Hebrew this north-facing gate, which leads to the Old City markets, is called the Flowers Gate. Some say the name derives from a rosette carved over it. However, in Arabic a similar word means “awakened,” and may refer to a nearby cemetery and the hope of resurrection. 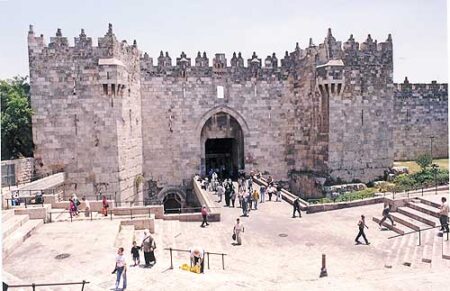 4. DAMASCUS GATE – The road to Damascus once came out of this Gate, you will also notice a smaller Roman Gate to the left, it would have been the Gate the Messiah came through with the Cross. The Damascus Gate is located on the northern wall, it is the busiest and most magnificent of all Jerusalem’s gates. It consists of one large center gate originally intended for use by persons of high station, and two smaller side entrances for commoners. 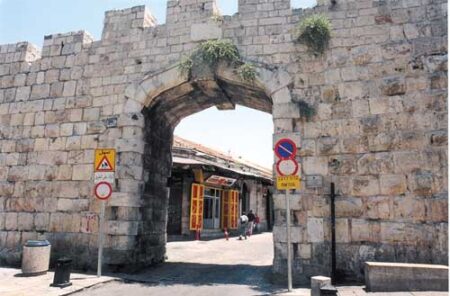 5. NEW GATE –  The New Gate is indeed the newest gate in the Old City, built 130 years ago in 1889 to provide better access between the Christian Quarter and the neighborhoods then being built outside the Old City. It was blocked up from 1948 to 1967, and the international cease-fire line that bisected the city passed nearby. The gate was reopened after the Six-Day War, and the roads around it were once again able to bear traffic.

The gate recently has undergone major renovation, and brings visitors directly into the Christian Quarter, which includes the famed Church of the Holy Sepulchre, the Morristan Compound and other historic sites. 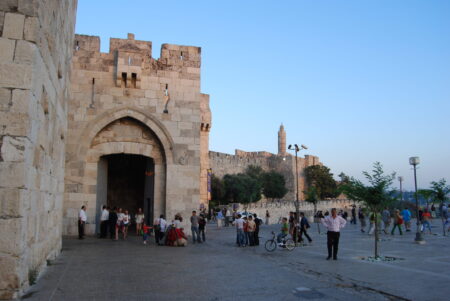 6. JAFFA GATE – The Jaffa Gate is located on the Western wall of the Old City. This gate has a lot of history over the past 100 years. The Jaffa gate marked the end of the highway leading from the Jaffa coast and now leads into the Muslim and Armenian quarters. A road allows cars to enter the Old City through a wide gap in the wall between Jaffa Gate and the Citadel. This passage was originally opened in 1898 when Kaiser Wilhelm II of Germany visited Jerusalem. The ruling Ottoman Turks opened it so the German Emperor would not have to dismount his carriage to enter the city.

In medieval times the Arabs used to call this gate Bab Mihrab Dawud, or “Gate of David’s Chamber or Sanctuary”, out of the belief that the room atop the Herodian tower stump represented the “private chamber” or “prayer room” of Prophet Dawud, which is specifically mentioned in the Quran (Surah 38. Sad, Ayah 21). Prophet Dawud is how King David is known in Islam. 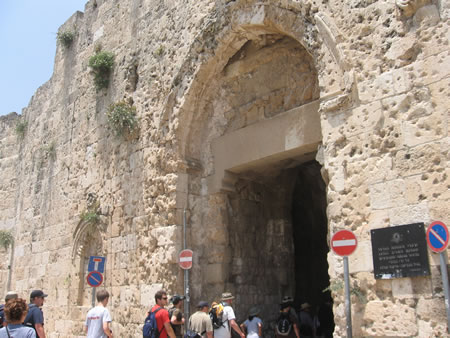 7. ZION GATE – The Zion Gate is located in the south part of the Old City. The Zion Gate was used by the Israel Defense Forces in 1967 to enter and capture the Old City. The stones surrounding the gate are still pockmarked by weapons fire. This entrance leads to the Jewish and Armenian quarters. You can see the bullet holes in the gate from the Six Day War in 1967. 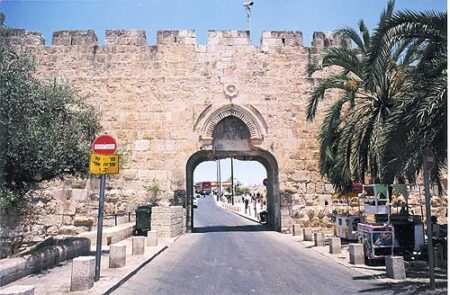 8. DUNG GATE – This Gate leads into the Temple Mount Area and the Western Wall of the Temple Mount. Solomon’s stables were close to this gate. The Dung Gate is located in the south wall. Since the 2nd century, refuse has been hauled out of the city through this gate, hence the name Dung Gate.