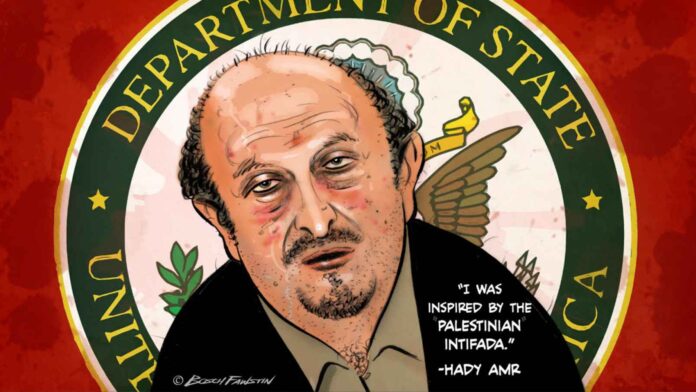 Front Page Mag: “I was inspired by the Palestinian intifada,” Hady Amr wrote a year after September 11 while working with an anti-Israel group.

A few years later, the Beirut-born extremist had become an advisor on Muslim relations to the World Economic Forum before heading up Brookings’ Doha Center for Qatar. The tiny Islamic tyranny is allied with Iran, Al Qaeda, and the Muslim Brotherhood. It’s a backer of Hamas.

The Obama administration appointed Amr as the Deputy Head of USAID’s Middle East Bureau which put him in a key position to direct taxpayer money from an organization already notorious for funding pro-terrorist and anti-Israel groups.

A decade after Amr had responded to the death of a Hamas leader by ranting that “there will be thousands who will seek to avenge these brutal murders of innocents”, the Obama administration made him a Deputy to its Special Envoy for Israeli Palestinian negotiations. Read More …

Opinion: The cast of Obama leftists selected for high office by the Biden administration is paving the road to Bible prophecy.

The 4000 year old question of who are the rightful owners of the promised land continues.

Wars and rumors of war.

The Obama/Biden two state solution, handing East Jerusalem (Temple Mount) over to Arab Palestinians as its capital, is perfectly acceptable to the secular left but completely unacceptable to religious Jews and the Christian right.

According to our Bibles, God wins. But before that happens, the matter will have to be settled by war.

The first of three wars leading to the end of this age was prophesied 3000 years ago by a temple priest named Asaph (Hebrew ‘seer’).

In Psalm 83, every Arab nation that is threatening Israel today will be so destroyed that they will be unable to join in the second of the three wars.

“Surely the Lord God does nothing,
Unless He reveals His secret to His servants the prophets” Amos 3:7

If you get nothing else from this website, hold fast to the fact that what God decrees through future prophecy absolutely must happen, as His decrees did in past prophecies.

See more on ‘The Last Wars in Prophecy’ HERE.