Gantz landed in the Turkish capital Wednesday evening for the first official trip to Turkey by an Israeli defense chief in over a decade, a sign of revived ties between the countries.

According to Gantz’s office, the pair discussed a “series of strategic issues, and the two countries’ commitment to work for stability, prosperity, and security in the Middle East and Eastern Mediterranean.”

His office said that Gantz thanked Erdogan for Turkish authorities managing to foil a series of attacks by Iranian cells that were planning to assassinate or kidnap Israeli tourists in Istanbul in late July. 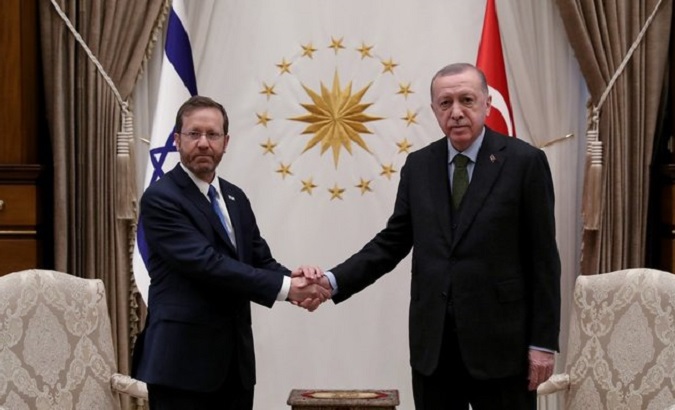 According to Ezekiel 38:1-6 Recep Erdogan, or a future Turkish leader, will join with Russia, Iran and at least 4 North African nations in a massive assault on the state of Israel to take its vast wealth.

Most rabbis (limited to only the Old Testament) think that Gog Magog is the final assault on Israel before Messiah comes. The attack will be so massive that the world will be certain that Israel will not survive, until God says enough!

“This is what will happen in that day: When Gog attacks the land of Israel, my hot anger will be aroused, declares the Sovereign Lord. 19 In my zeal and fiery wrath I declare that at that time there shall be a great earthquake in the land of Israel. 20 The fish in the sea, the birds in the sky, the beasts of the field, every creature that moves along the ground, and all the people on the face of the earth will tremble at my presence. The mountains will be overturned, the cliffs will crumble and every wall will fall to the ground. 21 I will summon a sword against Gog on all my mountains, declares the Sovereign Lord. Every man’s sword will be against his brother.” Ezekiel 38:18-21

What the rabbis do get right is that after that victorious miracle, the sons and daughters of Jacob will desire to return to covenant relationship with the Father in what is called the ‘second regathering’. What they fail to identify is that the 7 year tribulation period is about to begin when Jesus turns His attention to saving them.

See our paper “The Three Regatherings of God’s People” HERE

Olive Tree Newsletter: To Help You Understand the Times