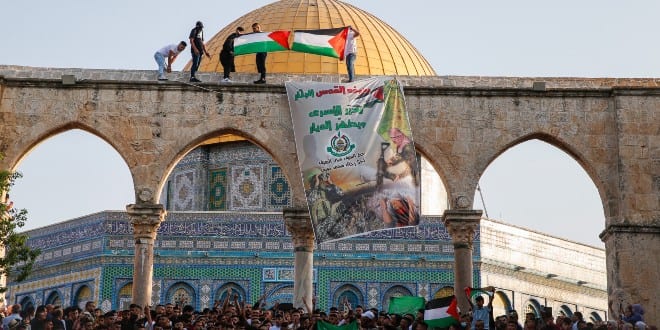 Israel 365: Over 100,000 Arabs filled the Temple Mount, Judaism’s holiest site, on Tuesday” for their holiday of Eid al Adha. Thousands more filled the Cave of the Patriarchs in Hebron while both sites were closed to Jews. Despite the supposed religious significance of the gathering, large banners displaying slogans for the Al-Qassam Brigades, the military arm of Hamas, were on display.

Pray for the well-being of Yerushalayim; “May those who love you be at peace” Psalms 122:6 (The Israel BibleTM)

Many in the crowd reportedly chanted,  “We shall sacrifice our lives for Al-Aqsa.” Read More

Opinion: The crowd is correct.

The descendants of Esau were forced out of Mt. Seir in approx. 600-590 BC and made their way east to settle in southern Judea as the Jews were being carried off to Babylon. In 586 BC the Babylonian army entered Jerusalem, ransacked the city and destroyed the soul of Judaism, Solomon’s temple. The sons of Esau helped, and God was not pleased.

There were so many Edomites in southern Judea at the time of Jesus that the Greeks and Romans called it Idumea and was mentioned on Mark 3:8. The harsh treatment of the Pharisees in Matthew 23 by Jesus and the one who betrayed Him, were mostly from southern Judea giving us clues as to their ancestry, and Malachi 1:4 prophesied they would return in the last days to try to take the land.

“Even though Edom has said,
“We have been impoverished,
But we will return and build the desolate places”.

Excerpts: Antichrist: The Search For Amalek