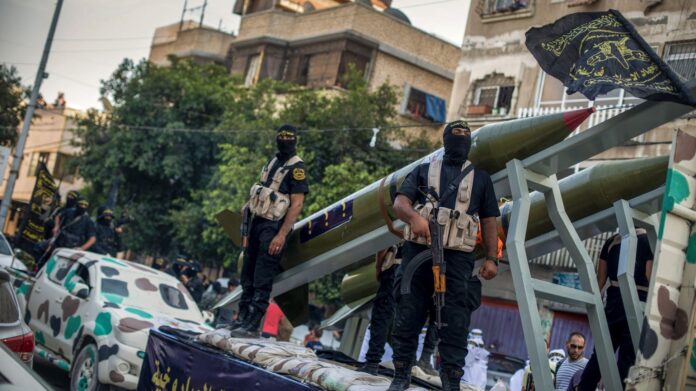 Washington Free Beacon: The Iranian regime is giving Hamas terrorists resources to produce “thousands of new rockets” in the Gaza Strip, according to a new report in Tehran’s state-controlled media.

Following a two-week-long war with Israel this month in which Hamas and other terror groups bombarded the Jewish state with missiles funded and provided by Iran, Hamas is moving to restock its weapons cache.

“With the end of the Israeli regime’s latest aggression, the Palestinian resistance has resumed the process of rocket production,” Fathi Hamad, a member of Hamas’s politburo, was quoted as saying over the Memorial Day weekend by Iran’s state-run Fars News Agency. “Our factories and workshops have restarted producing thousands of rockets to stop [Israeli prime minister Benjamin] Netanyahu’s intransigence in Al-Quds [Jerusalem] and Tel Aviv.”

Hamas leaders also said that despite the current calm between the sides, “This war will last forever.” Read More …

Opinion: Hamas is wrong. This war will end when Messiah returns.

“God came from Teman, and the Holy One from mount Paran. Selah. His glory covered the heavens, and the earth was full of His praise.” Habakkuk 3:3 KJV

The descendants of Esau fled Seir in approx. 600 BC when a Nabatean tribe, master carvers of sandstone, forced them out.

The Edomites went east toward Egypt but knew that the Egyptian army was too strong for them so they turned up toward Judea in southern Israel as the Jews were being conquered and carried off by the Babylonians.

The book of Obadiah 1:1-18 records how the Edomites came under the wrath of God as they helped the Babylonians destroy Solomon’s temple and capture any Jews that escaped.

For the rest of the story, we turn to Isaiah 63:1-3. The prophet encounters a figure coming towards him that he does not recognize.

“Who is this who comes from Edom,

With dyed garments from Bozrah,
This One who is glorious in His apparel,
Traveling in the greatness of His strength?—

Isaiah pins down the exact place Messiah comes from – Bozrah, the capital of Edom, and the next verses tell of the end of Edom forever…

“Why is Your apparel red,
And Your garments like one who treads in the winepress?