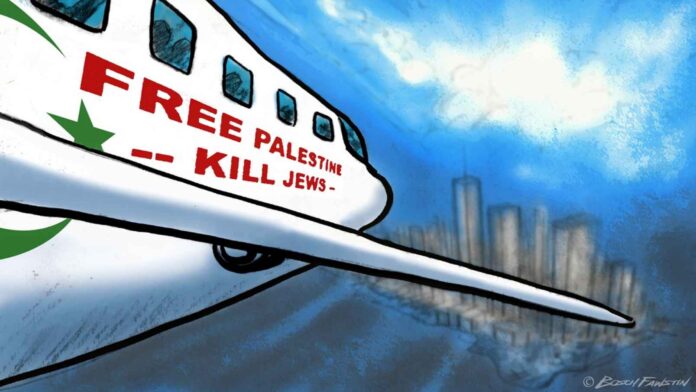 In 2015, The Atlantic ran a cover story titled, “Is It Time for the Jews to Leave Europe?”

In 2021, the question is whether it’s time for the Jews to leave New York and Los Angeles.

The magazine cover story mentioned Malmo. Most stories about antisemitism in Europe reference the Swedish city whose Jewish population dropped from 3,000 to barely 800. Current estimates are that Malmo will have no Jews left by the end of the decade as its population flees Muslim mob violence, firebombings, and random assaults: including 100 aimed at its sole rabbi.

“I hear students shouting in the hallway about killing Jews,” a public school teacher described. Firebombs are routinely thrown at Jewish institutions. Mobs have torn down gates to try to smash their way inside. A Swedish journalist who conducted a hidden camera investigation of what happens to anyone visibly Jewish was harassed within moments of sitting down to eat.

Americans who wondered how this could happen in Europe are now seeing it at home. Read More

Opinion: The diaspora, scattering, that began in 70 AD when the second temple was destroyed is coming to an end. The west has gone against God’s word, it supports Esau over Jacob.

And so the Jews are packing up and leaving, not just in the west but also in Africa with the ongoing Ethiopian airlifts. Two prophecies are being fulfilled.

How can anti-Semitism happen again? Easy. Only 6% of the US has a Biblical world view (here) and only 17% of Christians have it, according to Barna (here).

Like many European cities, New York City now has a large, angry population of young Muslim men who are looking to lash out. And Jews are an easy target. When Waseem Awawdeh was arrested over a vicious assault on a Jewish accountant, he declared, “If I could do it again, I would do it again,” and then received a hero’s welcome on his release.

The United States was built on a foundation of religious freedom and tolerance, a principle enshrined in the United States Constitution.  Nevertheless, the previous administration enacted a number of Executive Orders and Presidential Proclamations that prevented certain individuals from entering the United States — first from primarily Muslim countries, and later, from largely African countries.  Those actions are a stain on our national conscience and are inconsistent with our long history of welcoming people of all faiths and no faith at all. read more

The borders are now wide open. God help us.